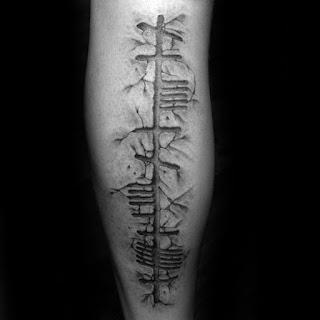 One morning, out of boredom,
God took an axe to the World Tree
and carved two simple figures
from it: Man, Woman.

To complete his morning's work
he gave them stones for eyes,
and about the holes that were their mouths,
he gave them figs for lips.

And so they stood before him,
mute like two guilty children,
the expression on their wooden faces
fixed, by his axe, in animal puzzlement.

God observed them for a time,
toy-like, almost beautiful –
imitations of life, but not life -
and he was dissatisfied.

So, he cut out his tongue
and gave each a piece for their mouths,
pulled out his hair in clumps
so that their heads would not be bare,

hacked off his ears and nose,
ripped out his own two eyes
with his bloodied hands,
cut his wrist with a knife

so that they too would have blood,
and veins for blood, and arteries
and fibres and muscles for blood,
and the history of all Creation in blood.

And there, lying in the sawdust
of the World Tree, deaf, mute,
blind and dying, God knew his work
was done.

I entered the garden from the Western side
and found on the grass a standing stone:
grey granite, rectangular, six feet tall.

It was cold and bare there in the garden
with the rain drafting sharp lines down
on the grey-hung day, the stone no ancient

or romantic pillar but rock freshly hewn,
plain, almost ugly, to look upon – how
misplaced it seemed there in the stark cold

amid the bare branches and green lawn.

All winter I sat beside the stone.

At first, perplexed I just watched it,
occasionally placing my hands gently on,
following the regiment of its turns.

Later, frustrated and tired, I reflected upon it
merely, rarely touching its granite now,
huddled beneath the shadow of its form,

growing more despondent with each passing
day, staring blankly at its persistent walls,
lost within the lattice of my thoughts.

In time, I just clung to this changeless block
until, in the end, my fingers grew worn
in my cold and hard and desperate embrace...

That night I fell asleep and dreamt it breathing.
It was warm and green and summer when I woke.
That evening I left the garden walking East

and travelled out into the wide world to learn
from those who understood the manner of stone.
I listened carefully to their words

and returned to the garden I had left
a season before. Patiently, I work now,
and discover the sculptor’s craft of line

and touch, revealing from this strange form,
the statue of a man, myself, as autumn comes.

I was ten the year I learned something
about life beyond my street. That spring
I left behind the simple games I played and found
Old Jackie’s field down by the railway lines.

I sat there in the long grass for hours
studying the secret life of hedgerows –
the frozen look of a hare, startled
and bolt-upright before me, then belting away

into the undergrowth; a fox glimpsed, nose
turned upward smelling the chill evening air.
But most of all I loved to follow
the frantic zig-zag of the hedge sparrows,

appearing from nowhere then gone in a flash
into the stick-maze of the ditch.
I found her prize there, buried away
deep in the tangle – an intricate weaving

to mind the delicate treasure: three sky-blue eggs.
My breath caught high up in my chest
as I rushed homeward to get my friends,
the bunch of us, all gathered around the spot –

all hushed and serious, I now the expert whispering
new knowledge to them. But the circle broke.
One hand reached in Don’t… don't touch it, I said,
the small already egg laying shattered at my feet,

its insides twitching horribly in the grass.

Forsaking sleep I rise in greyness,
walk through the open door,
mutely welcome the laden dawn;

Into the silent garden I shuffle
in nakedness, to gather with bare
hands the shrivelled foliage;

Cold feet upon the soaking ground,
my voice, like shedding trees, floats
murmured words into the morning air;

And I, standing by the stream
muck-covered and alone, offer
my decayed treasure to the water

thinking of you-love, me and soil

Waking the chrysanthemums, I whisper
words no living blood has heard.
Waking the rain-brown soil with
words meant for another’s ears.
Waking the broken hour with
words lost into the listless air.
Waking dead love with words whispered,
and prayers.

Again, the sleepwalker I wander
into a tangle of branches, bruised grey,
and blonde decay, listening to
the perpetual whisper of leaves.
Everywhere among the drenched trees
I hear your final words, trembling,
wrapped in soft syllables,
lost into a silence of waiting.

In this shifting weather of September
I could lie upon the sodden earth
as rotten wood, to sink below;
to lose my forgetting of the soil
of a soul lost. Or indifferent
to life and death, be pulled apart
by drunken women and thrown to the river,
to murmur, over and over, some name –
perhaps your name, Eurydice.

What cruel tales, at times, men tell:
they gave you life and love, then exile
you to a place ghostly as a dream, where
for you, there can be no return,
no resurrection from the ground, just
her name looping upon your swollen tongue –
pebbles for the river’s bed,
stone flowers for your lover’s grave.

Before me, porcelain-white, my wrist
almost hides its twitching pulse,
faintly seen as a ripple upon
still waters, above a sunken source:
the slow-pluck and drop beating out
its measure through my hours,
pushed from beyond some mystery,
a secret in a dream of shadows.

Casting a tired eye about me,
I am frozen still by the sight
of my breath a brumous wash –
white life in cold autumn.
I stand in this enormity, frail
as fog, enduring. Heaving
and sighing like a newborn,
despite all the hurt I must
come, in time, to know.

She said, “the sea has no memory”
(quoting a line she had heard in a film).
So, he went to the sea to try to forget
all he had learnt from his books.

And he said (remembering a poem he once read)
“the waves are heart-beats on the shore...”
But the naked pebbles hurt his toes and
the water about his ankles was too cold.

So, turning his back on the waves, which are
heart-beats, he mumbled to himself
“I am too tired of sea-music to sing
of things brilliant and strange as Ariel did.”

The pen bears witness to my need;
I feel it trembling in my hand.
But a tiredness creeps through the veins
always whispering No, wait until summer
comes, when the long hours burn
and then fill the waiting line with words…
To write that poem about my father
coming home with muddied hands
from Wood Quay having found
a Viking coin with Aethelred’s head,
his hard features preserved in bronze…

The pen bears witness to my need, yet
on the page my thoughts are still-born –
clay flowers from a clay mouth,
a garland of dead words.


What the Crow Saw

Sitting in a bleak pool
watching the waters move,
mercurial and black, the crow’s eyes
rippling against the stark daybreak.

Washing the lullaby child
at the Old-Stone lake,
holding him, the one still sick
for his mother’s milk.
Rocking him with a comforting lie,
concealed by him, a knife.
Then the killing of him with
a savage stroke and terrible doubt –
and thus, he ends the infant’s life.

Sadness sails strange heartbreak into the chest,
sadness that seeks the opened flesh, with long
white hands to stop the blood’s escape.
The burden of love’s task takes grip within,
like rain in trees after the storm is gone.

Beating the battered hour into a cup,
to contain within it, his crimson loss:
“Do not let the waters spill,
for the sake of this Holy well,
O do not let them spill, or plunge
down into dark destiny unwilled.”

All this the crow saw:
a man sitting by the water’s edge,
blood on his hands,
a deathly wound to his side –
holding a dead child.

At first it was the word I heard,
simply the word. The throat tightens
and tongue taut, to spit out the sharp v
the clipped k’s. The rumble of the r
in the cave of the mouth echoes a harsh
landscape: Rey-k-ja-vik.

Then there was a grey canvas that lay
empty for days, just hanging there
somewhere inside the mind, swaying
to the thrum of that syncopated word
(it a mumbled mantra of sorts).

Today it is a grey sea, a grey sky rising
from it, flexing a heavy swell and fall,
coughing up a white froth. From below
the seal-god comes, calling from
his underworld: swim deep, cross
the sea, how else will you learn to speak?

Blue is my world now that I follow him.
We weave a slow course beneath the fishing boats,
soundlessly dodging the nets they drag behind them.
He has brought me to the waiting room
of myself across the blue corridor of ocean.
But I must not be fooled, for soon
I will stand alone on a glacial shore.

The waves lash against the rocks. I crawl
up from the surf, scramble over shells and stones
and the thunder of seagulls that fills the world.
The salty light burns my eyes – colours are washed
and metallic here. A sharp wind licks my skin.
It is a messenger of the snow – follow, follow.

A city squats not far from here.

(I suppose it is a city like all others: people
busy in the shops and streets, cars going past
in a steady flow, conversation shuttled
along the counters of restaurants and pubs –
it is the currency of the living blood.)

I do not seek such comforts this morning.
It is the violence of genesis I’m after: the waters
breaking, the red mess of afterbirth, the first sounds
garbled out into the weak daybreak. I begin to walk.
With each step the years dissolve. I strip back self
layer by layer till there is little left:
the scrawling in a bird’s nest, the mysterious
writings on the underside of a stone,
the windswept syllable of the moon.
The word forms again on my lips. Reykjavik.

The place is named. I return to where I began.
A window. A desk. A piece of paper and pen.
The night huddles against the pane,
I all alone in my hidden den. 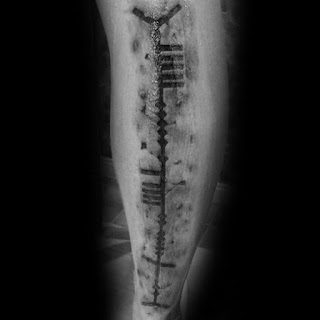 
'The Stone', 'What the Crow Saw' and 'Closer Than Coldness' first appeared in Live Encounters: Poetry & Writing (2018) edited by Mark Ulyseas.

My sincere thanks to Brian Walsh, Shauna Gilligan, Beth Phillips, James W. Wood and Adele Ward for their notes on the material included here.

Posted by Noel Duffy at 6:40 AM No comments: