In 2003 I started an MA in Writing at National University of Ireland, Galway, on the scenic west coast of Ireland and 'far from the madding crowd' of Dublin. I really went there to try to complete work on my first collection of poetry but the ethos of the programme was to encourage us to experiment with all forms of writing. During the first term, I took a course in playwrighting. The teacher was very practical in her approach and threw us poor writers in with actors for free-improv and the like, but I thoroughly enjoyed it even if it dragged me way out of my solitary writing habits.

We were given various assignments throughout the 10 weeks and for one, I chose my own theme: to write a cross-talk monologue that was dramatic in intent not comedic, since cross-talk is almost always used for the latter effect. The teacher wasn't sure it could be pulled off. In any case, this was the piece I wrote, which I rediscovered recently (while nosing around old files) and decided to share here as I doubt it will appear in any future collection (though you never know). I hope I did meet my own challenge and do something worthwhile with the form. I call it a 'drama-poem' (which may be a misnomer) but I think the repetitions and intercuts create a poetic impact as much as a dramatic one. See what you make of it! 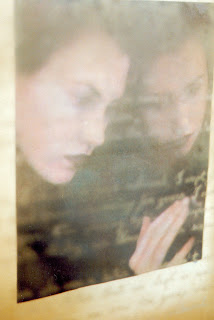 A Day Without Words


A Man and a Woman stand at opposite sides of room each lit by a single spot-light. They speak directly to us.

He:      The letter came. Weeks later of course. It didn’t say yes but “Dear Sir, we are delighted to say” … (like stones in his mouth) Delighted to say…
She:     He did write. Some days. I never replied. It was too late for that for the letter was
from someone else, not intended for my eyes.
He:      My book: the story of a group of friends. Responsibility. Success. Lack of it. How it changes them.
She:     We had changed too much. The both of us.
He:      I based it on myself, in a way, though didn’t see it at first. A man who can’t stop. Can’t rest. Life just happens to him and all he can do is react until it feels like what he wants.
She:     We lived with each other till we didn’t see each other anymore. Just what we wanted. For ourselves. Not each other. Not anymore.
He:      And all he really wants, though he doesn’t know it, is silence. And I realise now that that is what I wanted too. Days of silence.
She:     If we could’ve just stopped for a moment.
He:      And now I have. At least until tomorrow when I start to promote my book.
She:     Tomorrow I start another play. Leading part. Important role. And now I can’t stop.
He:      And I want words again. Though not mine. I want hers; to hear her voice, to have a day filled with her voice. I almost think I cannot remember a single thing she said precisely. A single sentence.
She:     There will be a full house. People in their seats waiting to be moved.
He:      I could go to see her. But she doesn’t belong to me in a theatre full of people. Never did. There she belongs everyone else. Or maybe just herself. And though she is not mine anymore I would still be jealous. And lonely. And would deserve no better.
She:     I will stand on the stage and try to break their hearts, yet feel with every word and gesture that somehow, I haven’t deserved it, despite all my long work to be there: that I’m a cheat, a fake, a fraud knowing that he wrote me the part of a woman wronged. Stupid I know but… But I can’t stop.
He:      I will go away tomorrow and read from my book.
She:     I will speak my lines –
He:      I will read my words –
She/He: …and think of the one person who truly matters who won’t be there to hear
them.

The spot-light holds on both their faces then fades out slowly to BLACK.

Posted by Noel Duffy at 2:58 AM No comments: