I came across a project called Uncommon Deities which was performed as part of the Punkt Festival in Kristiansand, Norway, which has taken place for a number of years now and is curated by Jan Bang and Erik Honore, musical legends both in the field of organic electronica.

In 2012, the festival featured the launch of this musical/text collaboration, with a grouping of poems about the nature of God - some serious, some playful - by acclaimed Norwegian poet Paul Helge-Haugen, but ending on this coda piece written by Nils-Christian Moe-Repstad.  The entire work is sublime and there is a beautifully designed book to accompany it. Guest narration on these poems is from David Sylvian.

So without further ado, here's the piece, '...with amber and rust / boned from evolution / you are. I am / a lecture on fossils...' 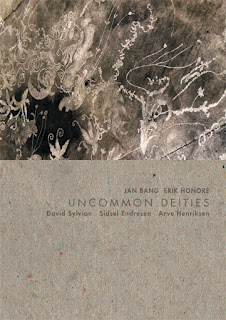