This poem and commentary first appeared on the University of Liverpool's 'Centre for Poetry & Science' website, edited by poet Deryn Rees-Jones. More content on this very fascinating marriage of ideas can be found at the Poetry & Science Hub.

The surprising simplicity of it
there among the shoal:
little earth-memory,
spiralling palimpsest.
It is the alpha and omega
of necessity, the first word
and the last of all
argument. And if the eye
is steady retrace the slow-
turning of centuries
and descend step-wise,
down the tight curve
of its spine to the centre
about which all appears
to turn. And there,
to close your eyes
and push one step further,
past language and origins
into the dark beginnings
of it all.

from In the Library of Lost Objects (Ward Wood Publishing, London, 2011) 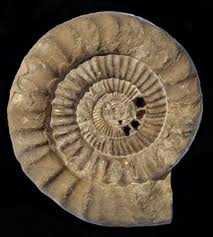 As the French theorist Gaston Bachelard points out in The Poetics of Space, stones represent a special place in our imagination. They are symbols of permanence, at least to everyone except a geologist, who would view them undoubtedly as dynamic. It is no surprise that the grand monuments of any great society – from the Neolithic ‘time chamber’ at Newgrange to the Arc de Triomphe – are made of stone. They are there to endure, to suggest power over time; to defy time for as long as possible.
We often think of ourselves as being in possession of a Self, as Jung would put it, or an Ego and Id as Freud claimed. In a way though, we have many selves. There is the weight of personal memory and the biographical self; there is the social self, which is probably the one that doesn’t make it into poems; there is also the set of ideas we have encountered and assimilated giving us, what we might call, a philosophical self. In my collection In the Library of Lost Objects I have tried to explore these different ‘selves’ in a way that they become interconnected and necessary to each other, the small or large personal dramas played out against the backdrop of an impersonal canvas: deep time as well as lived time.
If stones signify permanence, fossils represent a special case. They are life preserved in rock. As such they are a kind of double-image of the notion of permanence, giving us both a glimpse of what they were as living things, and their concrete existence in the present as “little earth-memories”. Their lives are short-lived, but through the process of petrifaction, they possess an after-life, surviving across vast tracts of time to present themselves to us behind glass in display cases.
This poem is based around a simple conceit: that the spiral form of the ammonite represents both its own cause and the spiral of evolution itself. We push back in time and “descend step-wise / down the tight curve / of its spine”. This brings us to the origins of life itself and beyond to the point of unknowing before “the dark beginnings of it all.”
In an earlier draft, that phrase “of it all” read “of the world”. The word world is one of most powerful in the language, yet here it seemed too abstract and general. The more casual “of it all” seemed to suggest something broader and bigger, yet more mysterious: life itself.
*
When CP Snow delivered his famous lecture in 1959 on the “two cultures” – the sciences and the humanities – they seemed to him at that time to be growing ever further apart. It is an observation that is probably even more true now. I think to resolve this we need to understand that the sciences and the arts can live side by side and both serve a function, though it would be simplistic to say it is the same function. Science gives us objective knowledge whereas a poem can never be verifiable in the same way as a scientific argument is. It is not a theorem and its proof.
Yet, at the same time, I believe the best poems endure because they represents a different type of truth, though one that is more persuasive than empirical. It gives us a sense of the subjective and emotional nature of our daily existence. In other words, where science excels at giving us definitive, objective knowledge, poetry and the arts are the instruments of expressing the experiential nature of our lives – even when encountering something as seemingly abstract as a fossil, as I try to show in this poem.  I very much hope that poetry can engage with and be informed by the rich insights, vocabularies, and discoveries of science. As someone with a background in natural sciences, I draw on these subjects not just for effect but because they feel integral to the way in which I respond to, and write about, both the personal and philosophical aspects of life. In the end, all these things can connect and inform each other. That is my hope, at least.

Posted by Noel Duffy at 3:34 AM No comments: