I hadn't planned to write another collection after my last, Summer Rain, for quite some time. The thing is, the lead in time for publication is often 18 months to two years and, frankly, I got bored waiting so decided to write a short sequence called 12 Imaginary Postcards, a vague idea for a suite of short, imagistic poems I've had for a long time.

In the end, the idea grew beyond its initial (short) intention and became a full-length semi-narrative collection called Street Light Amber: A Metaphysical Love story. The publication date is yet to be set in any firm way, but I hope it will appear early next year if my publisher sees fit etc.

For now, here's a slightly eerie poem from the book. As the 'story' unfolds there is an ever growing sense of uneasiness that creeps in, to the point of (let's call it) suburban disturbia. I think this piece best captures that aspect of the work so here it is. I hope you like it, even if subtly unsettled by it. I was when I wrote it.

The poem first appeared in journal Studies in Arts & Humanities produced by Dublin Business School, where I once taught screenwriting in the Arts & Media Department.

I pull the curtain back, the day ending
to a dull turquoise above the rooftops
of the neighbours’ houses on the square,
the lined sentinels of the bins by their gates
that seem to stand in watch recording us.
The streetlights flicker on, one by one,
the hoods of the cars in the driveways
a shimmering metallic, the tail of yesterday’s
storm ghosting in the branches above them.
Sometimes I dream there’s a body
buried out there under the cedar tree
beneath the camouflage of autumn leaves
and all our fallen memories. I let the curtain
fall back, passing like a shadow across the brain.
I watch you lying on the bed, half asleep,
no shining light to disturb the eye just
the bulk of things hiding in darkness.

Posted by Noel Duffy at 5:09 AM No comments:

I was flattered when David Butler asked me to launch his latest collection All the Barbaric Glass last spring. David really is a marvelous poet and I am also a huge admirer of his debut collection Via Crucis - so much so that I wrote to his publisher to congratulate him for publishing it. David manages in his poetry a delicate mix of verbal dexterity, vivid imagery and heartfelt feeling. I recommend his work highly to you if you've not encountered it yet.

For now, here are my introductory remarks on the collection. It can be purchased directly from his publisher Doire Press, who are doing great work in finding - and publishing - original voices in contemporary Irish poetry - including, of course, David Butler himself. 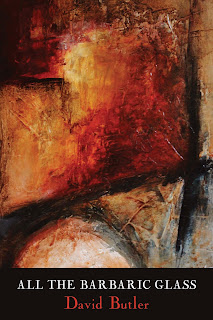 A Question at the Shoreline: ‘All the Barbaric Glass’ by David Butler

All the Barbaric Glass was launched at the Irish Writers’ Centre, Dublin, on 23rd March 2017.

The opening lines of the first poem, ‘Breaking’, of David Butler’s second collection, All the Barbaric Glass, acts as a statement of intent for the work, one which he steadfastly adheres to throughout:

There are times you need
to step outside of colloquy;
to mute the looping newsfeed,
the tinnitus of the immediate.

This is a collection that consciously steps beyond ‘the newsfeed’, the constant information thrown at us both in daily life and in the online sphere. That world occasional encroaches on this mission in certain stray moments, but David resolutely stays the course to give us something beyond mere reportage or internet chatter.

The striking imagery of the collection reminds us that this work exists at a boundary, most obviously, that of the physical landscape of the shoreline, the place between land and sea. The shoreline is a very real and concrete location throughout the poems, but subtly reaches the level of metaphor also, representing as it does so the space between life and death, loss and love found, the solid ground of the present and the less certain waters of past and future.

This notion of the blurring of boundaries is heightened also by the fact that many poems take place in the gloaming, the dusk-light, that liminal space between day and night, becoming the shadowland of the poets inner, self-questioning thoughts.  The passage of time is marked out through these scenes as when a young child finds a dogfish washed up on the beach and the poet observes:

...Small wonder
the child with bucket stands and stares
and starts to hear the song of sand;
the whisper in the hourglass.

Such philosophical preoccupations are threaded throughout the work but there are also more emotionally direct pieces, most particularly those about his father and late mother, such as ‘Death Watch’, ‘Watcher’, and ‘Family Album’. His father’s descent into Alzheimer’s is not just observed, but observed closely and felt to the core. In the poem ‘Father’, David takes us far beyond cold statistics or even, indeed, the powerful testimony of loved ones seen on a segment on the TV news, to a fully articulated statement that captures the heart-breaking reality of the condition as experienced by both the father suffering it and the son’s efforts to try to understand it:

What unsigned city is it you wake in,
featureless, or with such altered features
the streets are not familiar, or if, with
shifting familiarity, like dreamscapes
you wake from?

The autumnal/wintry setting that pervades the collection also seems to suggest that the work exists in the wake of such loss and questioning, where we view the shoreline differently again – not just as haunting but as one now ‘haunted’ by personal grief.

It should be obvious by now how beautifully written these poems are. However, this isn’t achieved through a relaxed, easy lyricism but rather a starkly elegant one. There is an exactness and precision to these poems, an angular beauty, we might say, somewhat reminiscent of the that most descriptively rigorous of Irish poets, Thomas Kinsella. Take these lines from ‘Correspondence’:

There are more
tongues here than in a metropolis
gorse and cowslip and insect
all flash their intimate semaphore;
a corncrake croaks Morse; while a skylark
hoisted high as radio-mast,
is twittering its incessant machine-code

It is this sense of rigour which offers a controlled, formal elegance to the language, the observational accuracy perhaps reflecting David’s studies in engineering at university. There is an eye to detail, as ‘Correspondence’ shows, that other writers may well miss.

However, there are also moments of counterpoint placed in the lattice of such a grief-work, where splashes of colour interrupt the wintry shoreline scenes and present their own vivid reality. In ‘Grand Bizarre, Istanbul’

Suddenly the senses are ablaze: scent
has tumbled into an Aladdin’s cave
that illuminates the throve of memory...

while in ‘Mellifont Abbey’, bees

At the same time, the contemporary world of the ‘looping newsfeed’ and internet babble breaks through on occasion (as it must), impinging on the other reflections of natural setting. Yet found amid this ‘tinnitus’ is more important news, news that matters and captured in the vision of “all the suitcases, empty as grief / that bob on the Aegean...” bringing us closer to the scene, however briefly, of distant calamity.

To end, I just wanted to note something I only fully appreciated on a second reading of All the Barbaric Glass and one that strikes me as important and central to this books appeal. That thing is the presence of the question mark throughout these poems. So often when poets ‘question’ (especially these days) they are questioning others in accusatory tones for their social or political ineptitude, their incompetence, faults and lack. The ‘other’, in this sense, is always an easy target for lazy vitriol.

Here, though, the questions are those asked of oneself, offering a form of self-reflection and self-questioning that, in the end, is a method of self-interrogation that leaves no place to hide for the poet in these poems. This is not, in the end, a collection that offers easy resolution or explicit consolation, though nor is it one lacking in humanity or tentative hope.

The last two poems of the book demonstrate this unerring honesty. In ‘The Injunction’, the poet remembers the Deutsche Grammophon records his father would play on the old record player in the living room when he was a child, and how: “Still it reverberates / like a paternal caveat: /the cough of the stylus defluffed; / the circuitry clearing its throat; / the expectant static...” In the beautifully strange, and slightly chilling, final poem ‘Restless’ two lovers look out onto the sea as they walk the shoreline. She imagines she spies a body bobbing in the surf, just beyond the rocks. They peer out together, more alert now. He questions her assertion, then responds:

It’s not, I say again, less sure.
Less sure of myself, too
and of us,
with the sea and wind and world enormous about us.