'The Beekeeper to his Assistant' on BBC iPlayer

Just a quick post to mention that my poem 'The Beekeeper to his Assistant' was broadcast on BBC Radio 4's Poetry Please, hosted by Roger McGough, on 6th September. Was a truly great honour to be included. The show will be repeated on Saturday 12th September at 11.30pm, but will be available (worldwide) on the BBC iPlayer for the next month or so. (See below link.) The theme is, indeed, bees and you'll find some really lovely pieces by Tagore, Carol Ann Duffy, Jo Shapcott, Sean Barodale and Roger McGough, among others, as well as my own small offering, which ends the show. Insight, also, from beekeeper, Jeff Davey, between poems.


So here's where you can listen in, should you wish to. Link will go down on 12th October.


Now that the link to the iPlayer is down, here's the text of the poem for anyone who might be interested.

The Beekeeper To His Assistant

You must understand from the beginning
that the hive is a mind and one
you will not comprehend. Behind
the frantic to-ing and fro-ing of the bees
order prevails: the honeycomb from nothing
builds itself by geometry alone, cell by cell,
the Queen its centre and circumference.
Even the pollen-drunk dance of the messenger
returned from gardens heavy with blossoms
is a kind of mathematical waltz, calculating
in each step the sun’s slow orbit through
the heavens. For all the talk of the nuptial flight
no one has ever seen it, though it must happen.
Once in early summer I did see the Queen hover
by the hive’s entrance awaiting the drones.
And they came, hundreds of them, greedy
for her scent. I saw them disappear into the shade
of the meadow in her wake. That was all.
When they returned to the hive at dusk
exhausted and sticky from their work, their wings
were snapped and they were thrown to the earth.
Not even the Queen can evade the will of the bees.
Unknowingly she gives birth to her own successor
incubated in the brood and hidden from her.
Without a sign her servants descend on her
in a swarm and she is smothered – by violence
the honeycomb becomes her honeyed mausoleum.
Yet despite these explanations I have told you
nothing. And the beehive has its secrets.
I live for those moments in late evening
beneath the lilac blossoms when the bees
gather in a cloud about me, buzzing flecks
of light like Einstein’s vision. It is a door
into the heart of summer where time
seems to slip away and is lived through.

'The Beekeeper to his Assistant' appeared in my debut poetry collection In the Library of Lost Objects, which was published by Ward Wood Publishing in 2011. 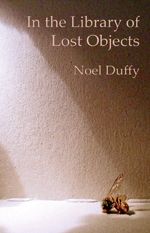 Posted by Noel Duffy at 2:49 AM No comments: