I've been a lazy blogger of late but mainly because I was working on completing my third collection, Summer Rain. I'm delighted to say that the book has gone through its final edit and is now with the printer. It will appear in a few weeks time and I will add links to the many and varied places it can be purchased - should you be so inclined to do so.

For now, here's the cover and blurb. Hope it catches your eye! 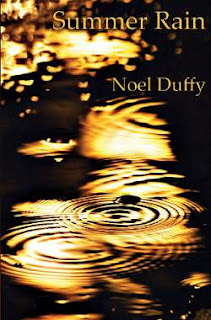 Noel Duffy’s third collection, Summer Rain, takes the form of three sequences: the first, a drama, set in late 19th century Vienna, recounting the final years of Austrian physicist Ludwig Boltzmann’s life. The second is a series of fifteen observational nature poems based on the cycle of water, reimagining the ideas of the Romantic Poets through the lens of 21st century knowledge. The final sequence is a series of intimate dramatic monologues unfolding in modern day Dublin as the ‘Summer Rain’ of the title drifts in and out of the awareness of the ten speakers.

‘Duffy understands poetry. It’s his tradition, and he has a curatorial urge to see it thrive.
He just gets down to the heart of things and gives us poems that matter.’

‘Duffy’s work is rooted in a deep study of his medium and the poems in  In The Library
of Lost Objects work in concert in a way very few books achieve.’

‘A striking feature is the author’s fascination with the sciences, formal and natural... following in the illustrious footsteps of other scientist-poets: immunologist Miroslav Holub, biochemist Jean Bleakney, polymath Mario Petrucci, and fellow physicist Iggy McGovern.’

‘The truth is that the poems sing with the pure ideas of a poet who has honed
his craft, but still remains full of wonder.’